When I chose Zumbro to be my first 50-mile race, I was optimistic. It’s a race in a place I enjoy, full of people I love, and it has a generous 18-hour cutoff. It would be hard work, but not outside the realm of possibility.

Until the weather blew in.

I woke on Friday morning in a warm hotel room, the sound of rain pattering on the sidewalks outside. My plan was to hunker down here as long as possible, knowing I wouldn’t sleep well at camp before my midnight start. I got restless, though; Zumbro was calling. I’d dropped off my husband with our camper the night before, and I was ready for the big day to begin.

With activity all around me, my day was uneventful. Hours of rest and almost-napping were punctuated by trips to the Start/Finish area. The 100-milers were cycling in and out as the day wore on, covered in mud from the slick, sloppy, course. The rain came and went, and without cell reception to check the weather, my hopes were rising. Maybe the blizzard would miss us.

I was curled up in the camper for yet another fitful nap at 8pm when the thunder and lightning started. The winds pounded the camper as rain and sleet came rushing back in. By 10pm, the tapping of sleet had turned to a splatter, and I smiled from my blanket cocoon, assuming we were settling in for a night of drizzle.

Outside, however, was nothing but snow. Where only hours earlier the landscape had been brown and muddy, it was now whitewashed. The flakes were monstrous; enormous conglomerations of wet snow that smacked me in the face like well-aimed snowballs. The beacon of the Start/Finish area was now invisible, obscured in the whiteout.

For the 50-milers, this is where the story began.

“We debated letting you start tonight,” the race director told us. The conditions were treacherous, and by the time we reached Aid Station 1/4 in only 3 miles, we would experience life-altering conditions. It would not get better. “If you’re not confident, take the shortcut back to the start.” There would be no on-course rescue; the ATVs and shuttles were getting stuck in the mud and snow. Be safe, be sure. Or don’t start.

With that, we were released into the darkness.

The hills were steep and slippery. It wasn’t the mud, and it wasn’t the snow. It was the unholy demonspawn that was born when the two mixed in just the right proportion, packing the snow into ice with a slick sheen of mud over the top. The conga line of runners was moving slowly, deliberately, as we climbed the narrow path.

As the path widened and the field began to spread, I settled into a rhythm behind another runner. His name was Charlie, he said, and we chatted briefly, companionably as we slogged through the mud. It was hard to tell exactly how deep each muddy stretch was, until you stepped and sunk to the shin. The air filled with the sound of feet. Plop-shhhlockplop. Plop-shhhlockplop. Once, my foot came out without my shoe, and I delicately fished my foot back into the deep hole, reseated it into my shoe, and carried on.

And still, we were climbing. It felt like miles. It might as well have been miles. Then, we were at AS 1/4. Glowing lights, cheering, applause. I felt overheated, but here in the valleys, sheltered from the wind, it was hard to judge what level of layering was appropriate. We all dressed ourselves expecting the worst.

Sometime soon after AS 1/4, Charlie dropped me. My world reduced from two headlight beams and a pair of guiding feet to one solitary circle of light. Runners would pass or be passed, but I found myself very alone in the woods, in the dark. I liked it that way.

Where the footing was bad, it was very bad. At AS 2/3, I sat down to dump mud from my shoe and scrape little clods of dirt off the soles of my socks. There were places on the course where I would ski down small hills of mud, using my poles to catch myself. And there were other small hills of ice, where catching myself was harder. Scarier. It was never more than a few feet at a time, but it was enough to rattle me.

It was somewhere after AS 2 – before I would see it again as AS 3 – when I decided this would be my only loop. The icy descents were too hard, and though they were few, I knew I was risking significant injury. I filed it away: Noted. One loop. Check.

And where the footing was good, it was very good. Stretches were beautiful, soft, runnable. I got into the rhythm with my poles, pulling myself ahead, up and over. When it was good, over and over again, it was incredible.

In these times, I would need to remind myself: One loop. All of this isn’t worth falling down a tiny little hill.

The parts of Zumbro that are normally dreaded were fantastically runnable, thanks to the weather. The sand coulees were soft with snow, the perfect consistency for effortless running. The rocky descents were packed, the rocks less threatening under inches of snow. I ran spots that ate me up last year, during an historically warm Zumbro 17, and it felt wonderful.

After AS 3, the game changed. The climb up Ant Hill passed quickly this year, with the enormity of the looming hill reduced to a small circle directly in front of me. My hike was strong, and I was anxious to get to the long, moderate ridge at the top.

As I crested the hill, no longer nestled in the trees, the wind hit. Weather reports had anticipated 22mph winds, and the gusts were much more. The snow was whipping here, crawling across the trail into knee- and thigh-deep drifts. Within minutes of a runner passing, their footprints were obscured. Every step was breaking trail here. Sometimes, a howl of wind could be heard, and I would crouch down, turning my face away, bracing into the gale. In daylight, I knew I could look out across majestic vistas and see for miles. In the dark, I suspected I was inches from certain death, and the valley was waiting to take me.

I’ve been cold while running, but never quite like this.

I traversed the ridge like this for over a mile, trudging and ducking and trudging some more. The descent from Ant Hill, a treacherously rocky hill that claims ankles every year, became more runnable as the blizzard went on, transitioning into soft, snowy track with only hints of rock.

And then I was back into the valleys. The mud was firming up with the cold, the difference between wetness that spills over into your shoes and softness that maintains a deep footprint. The footing was improving as the race went on.

One loop. Still reminding myself.

The long gravel road went on for a lifetime. I was awake and alert, but still, I heard voices in the woods and slew that surrounded me. Laughter. Or maybe just the creaking of trees and the shaking of snow. The branches were hanging low, sometimes scraping faces and heads, heavy with snow and ice; some snapped and cracked with the weight. I stopped to tie the same shoe over and over again, the frozen laces unwilling to behave.

AS 1/4 came and went for a second time, sending me onto the final leg of the course. There were only a few miles left, with a long singletrack section that felt like home. The snow here was perfectly packed, soft underfoot, winding through the trees. The sun was just beginning to rise, casting the landscape in dark greys, and my heart skipped. I smiled, I ran, I was full of joy here. I wasn’t ready to be done.

Finally, the singletrack dumped me out onto the rutted, flooded, muddy road leading to the finish. Less than a mile of hopping over and around tiny lakes and streams and it was all over. I ran across the snowy field at the campground, focused on Start/Finish. My husband stood waiting, cheering, as he’d been doing for nearly every runner since Friday morning. I burst across the line, beaming, exclaiming to anyone who would listen: “That was amazing! I’m not going back out, but that was amazing!” Surrounded by friends and loved ones, I felt invincible. For a few minutes, I was invincible.

My loop time was 5:55, a decent time in these conditions, but not enough for a viable 50-mile. I felt good – really good – and was ready for more; seeing my time made choosing to stop that much easier to stomach.

And that’s where my Zumbro 2018 race tale ends. The next 10 hours were spent alternately huddled in the car and mingling with friends. I finished healthy, uninjured, and proud. It was the best DNF I could have ever hoped for.

Post-race systems check: Achy ankles and knees, tender feet. No blisters, no chafes, no sprains. A little sore the next day, but will be ready to run in a few days. Onward to the next adventure!

2 thoughts on “2018: the year Zumbro out-Zumbroed itself” 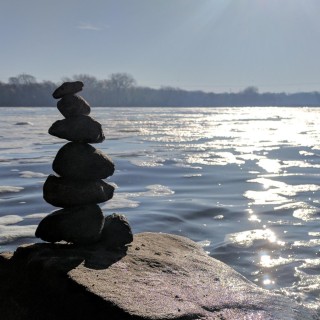